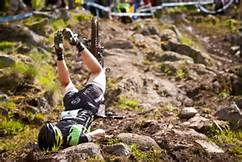 I’d say probably 20% of my biz is from people that have a “crash hangover.” In other words, they had a big crash and are having a tough time getting their head back in the game. Their confidence is rattled and all they can seem to focus on when they get on the bike is what could go wrong.

Coming back from a big crash isn’t easy. Like most things difficult, curing that crash hangover takes some time and effort. Yet, it seems that everybody feels that they should just be able to snap their fingers and make it go away. Unfortunately, it doesn’t work that way.

But I do have some good news: there is a cure!

First, let’s take into consideration that the fear is there for a reason. Your primal-emotional brain is telling you, hey, last time we did this bike-thing we got WORKED! So maybe we shouldn’t be doing this.

But, your smart human-brain knows that you still want to ride bikes and that you definitely can still do it at a decent level. So you ague with yourself. But, at first, that primal brain is gonna win. And, it’s real tough to just over-ride that fear.

So, you have to re-boot the system.

First thing you have to do is just get some seat time, get back on the bike. But do this on trails that offer you absolutely no challenge or threat. Put in rides on trails that are easy and boring. If there is anything that freaks you out — even a little — get off and walk. This seems obvious, but many riders think they’re just going to jump back on the bike, hit the gnarly stuff again, and everything is just going to be A-OK. It usually doesn’t happen that way. (There are times, for certain riders, like high level racers, where you do need to “get back on that horse.” Such as if you had a big get-off in practice, at a race, and you still need to race. This article applies more if you had extended time off the bike due to injury).

What you’ll be doing is convincing yourself that you’re not going to die every time you throw a leg over the bike. Immediately, post-crash, you’re your primal brain isn’t so sure of this. Even though you know this to be true, you gotta feel it a few times to authentically trust it.

Probably the worst thing you could do, immediately after a big wipe-out, would be to go out and try to ride nasty stuff, but since you’re scared, you’ll probably ride timid, tight (shitty)… and then you’ll goon it again and have another bad crash. Then you’ll really have your work cut out for you.

Eventually, on the easy rides, you’ll start to feel comfortable and want to push it again. Congrats! You’re coming back. But, again, it may take some time.

Another thing you need to do is take a look at things logically. Why did you crash and can it be remedied? What went wrong and can you fix it? (Hint, hint: get some professional MTB coaching! wink, wink…). So many riders have big crashes because they don’t know the difference between good and bad technique, they’re out there just rolling the dice, gambling that things will go well: “I made something like this last week, so I’m just gonna go for it!” will catch up with you sooner or later. Many riders have no idea what the did wrong when they crashed. Worse, many riders have no idea what they’re doing correctly when they make tough sections. This gives them false confidence in their ability and then BAM! Consistently riding well is about having a high “Riding IQ.” Knowing what you should be doing in any situation and focusing on solutions (good, solid, proven technique) and not the obstacles, problems, what could go wrong; and definitely not just winging it and hoping for the best!

This part applies especially to higher level riders that are a bit shook post crash: you know that you still can ride at the level you were at previous to the crash. That’s a fact. Can’t argue with the facts. And, riding — even with the occasional gnarly crash — is way better for you than not riding. So get out there and do it. Take it easy for a bit, and it’ll come back. Make some adjustments, chill for a bit, pick your battles, but take the time to do things correctly and you’l be back to riding well and having a blast on your bike again.

If you’re a high level gravity racer, you’re going to ride real hard and push it. If you’re not taking some chances, then you’re not really racing. This means that every now and again you’re just going to crash hard. No way around this. But in any other situation, and with almost all other levels of riding, if you know what good technique is, work on it a bit, focus on it as you ride, break down sections knowing the CORRECT methods…..you can all but eliminate those big nasty crashes.

Finally, we don’t multi-task. “Multi-task” may be the catch phrase of the day/year/millenium, but our conscious brains actually are unable to focus on more than one thing at a time (unconscious is different). So, AGAIN, you need to focus on solutions and not obstacles. If you’re focusing on the solutions (Proper riding: body position, weight placement, vision, proper braking, breathing, etc), then you CAN NOT be focused on what may happen if things go wrong. If you’re focused on what could go wrong, then you CAN NOT be focused on proper riding…

The last one also goes for times when you’re doing something super hairy and right on the edge of your skill level. It takes full commitment in these situations and being fully focused on the solution is the only way to have full commitment.

So if you’re having issues getting your head back in the game, get out and get that seat time in on the easy stuff. Get a few of those under your belt. Work your way up with baby steps to tougher trails. When you do start pushing a bit, practice focusing on the solutions; give your mind something useful to do and it won’t wander to the fear. Get some coaching and raise that riding IQ.

The “Glass of Water” MTB Technique
Scroll to top