Cornering on a mounatin bike.

“Jump for show; corner for dough”

Being able to turn your bike well is a huge asset to your riding. If speed, flow, and riding to the best of your ability is a concern, then cornering well is a must. And if you’re new to riding – a beginner, novice, intermediate – control and safety in the turns is something that, if you’re not already concerned with . . . you will be soon.

Am I going to break down all of cornering here, in the span of a few hundred words? No, of course, not! Not possible. But I will touch on some nuances of cornering and hopefully shed some light on many things that are overlooked when it comes to doing it right;. And, of course – no matter what level of rider you are – cornering well is about the human body working optimally in an athletic sense in harmony with the design of the bicycle.

Take a look at these photos: 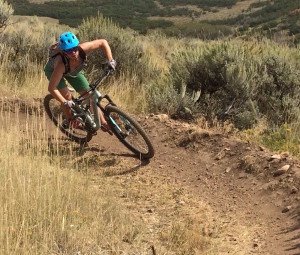 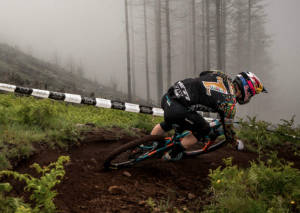 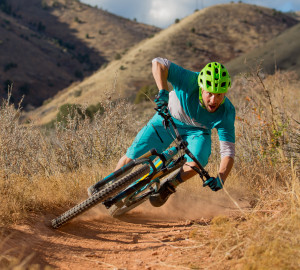 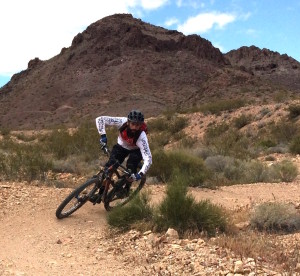 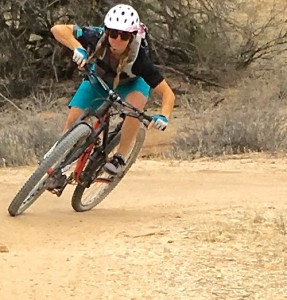 One is of 2-time, back to back current Enduro World Series Champ, Richie Rude. The others? Students of mine and myself. Point is, good cornering technique works at all levels.

One bummer that I see in MTB coaching is that cornering technique is always exclusively about what happens in the corner (I haven’t seen any exceptions) . Bummer, because the most important part of cornering is what happens before the corner. If you don’t read the trail correctly you’re already dead in the water. If you don’t set up properly in terms of body position, line choice, momentum management, proper braking – all happening before the corner – it’s already game over.

Lean the bike, not the body

Notice the lean angle of the bike in the photos. Notice how the core of the body is still very upright and controlled. This provides a balanced and stable platform to ensure effective movements of the rider’s limbs and, thus, effective adjustments, corrections, and manipulations of the bike. Also, the bike will turn when you lean it over. We want to let that happen; let the bike do the work! This means the rider can remain very much on top of the bike so that the weight and force of the rider pushes through the bike and stays much more perpendicular into the trail’s surface than if the rider leans the body at the same angle as the bike (as most riders do for various reasons). When we lean the body with the bike in a flat corner, the lower that angle gets, the more the forces of the rider are horizontal to the trail’s surface. This will eventually force the bike to slide out. We’ve all probably been there!

Again, none of the good stuff above is possible if you screw it up before the corner.

If you’ve been riding for a bit, you’re probably aware of the “attack position”, or the body position a rider should obtain while descending in tough terrain. This is the position the rider will need to be in approaching a corner (if the corner is at all fast or difficult). Assuming one understands the how’s and why’s of this position (which most riders don’t) and can obtain it while coasting down the trail or in the parking lot, then the question is how do we maintain that position as the bike decelerates hard under braking? Or, maybe, gets loose and slides around when it loses traction because of braking forces and rough, loose terrain; bounces violently through braking bumps, root sections, and rock drops; all while trying to slow down for the turn?

Many riders believe that leaning back under braking is the solution to the above dilemmas, but leaning back is one of the worse things you can do – for many reasons. When we lean back the bike will not pivot around the bottom bracket and float over the terrain (too much weight on the rear wheel). We also lose range of motion in our limbs when we lean back. That’s bad. And, that’s just the tip of the iceberg; there are many other things that go wrong when we lean back

What should happen with the pedals?

While my pedals will often go to 12 and 6 in relation to the bike, sometimes they are still level in relation to the ground and to my “line of force.” That means sometimes they’re 12 and 6 sometimes 10 and 4 . . . or anywhere in-between. Again, I want students to focus on keeping their weight centered on the bike, through the bottom bracket, and their pedals end up wherever they end up as a result of how much lean angle the bike gets.

Drop the outside pedal, though, right? Well, sometimes. It depends on the trail’s surface. In a berm, bank, or rut – in theory – the bike is still perpendicular to the trail’s surface, thus, bike lean angle away from the body isn’t really necessary. In this case, we often can keep our feet level and lean the body with the bike.

Why not keep the pedals level, even in flat corners? This is fine for beginner riders (who usually aren’t carrying enough speed to need much lean angle in corners), corners where you’re not really going fast enough to need much lean angle, or corners where the trail’s surface prioritizes accommodation of bumps, and, thus, the pivoting of the bike around the bottom bracket and fore and aft control of the rider’s mass. (Rock or root sections in the corner are examples of the latter where this would be necessary. The bike will actually have to be adjusted/manipulated to go relatively straight over these sections, meaning it will have to stand up and be much more perpendicular to the ground and pedals will have to level out as it travels over this section of the corner. Having the core of the body balanced and stable in order to make these adjustments mid-corner – often in the same corner: lean bike and turn; stand bike up to go straight; then, lean back down to finish turn – is another reason why maintaining proper body position approaching, as well as through the corner, is crucial.)

However, we simple can’t lean the bike over very far before it will hit our inside leg. So we have to move the leg – and rotate our pedals – out of the way. See above.

Weight the bars in the corner so that the front wheel will get traction? Nope. I don’t care how many 23 year old – and often super fast – pros tell you to do this (It’s kind of a cool thing to say you ride the bike very aggressively over the front of the bike like a motocross rider. One big difference: a motocross bike has a motor so it will accelerate back under the rider. It often has to be ridden over the front end to accommodate that acceleration. MTB’s don’t have motors. Therefore, with very rare exception, they don’t accelerate back under the rider.) With very rare exception this is terrible technique and a terrible habit to get into. Also, there’s a huge difference in pushing down with the arms on the front of the bike, perhaps steering to get traction . . . and weighting the front of the bike. This has to do with how your body works in an athletic sense and is crucial to all areas of riding, I prove why in my camps (Go to 2:32 of this video). If I do end up weighting the front of the bike it’s almost always a result of overcompensating because my weight was initially too far back, the front wheel was in danger of drifting and now I’m doing damage control. Not fast, definitely sketchy!

Keeping that outside elbow up is mega-important for so many reasons it isn’t even funny.

Lead with the hips? It doesn’t really work that way.

You will have to brake in many corners but it has to be done properly. Doing it wrong will put you on the ground in a quickness. Most riders brake incorrectly the majority of the time, and if they do this in a corner, they will almost definitely end up hitting the deck. This is why people – even most MTB coaches and coaching organizations – state to never brake in the corners: because they don’t really understand the dynamics of proper braking even in straight line (you actually can go faster by braking properly in the corners than if you don’t brake; “gotta go slow to go fast” works at times, but I’ll take Go Fast to Go Fast every time! Hint: braking isn’t always about deceleration.)

Obviously, there is a ton going on with properly cornering on a mountain bike. We address it thoroughly in the camps, spending a couple hours exclusively on cornering and touching on different examples through the duration of the camp. We relate descending body position and weight placement in a straight line to how this will directly affect our approach to cornering technique. Proper vision techniques are huge in cornering correctly.

If you’re still reading this, you’re interested. If you’re already fast, then you know that every little thing counts, and from reading this, you’ve probably deduced that there is still a lot you can learn. If you’re beginner, intermediate, novice, I promise, I can help you turn better, help keep that front end from washing out, and not only help keep you off the ground, but get you around the trail with more control, safety, efficiency, and – yes – speed!

How to Lead a Mountain Bike Ride
Scroll to top