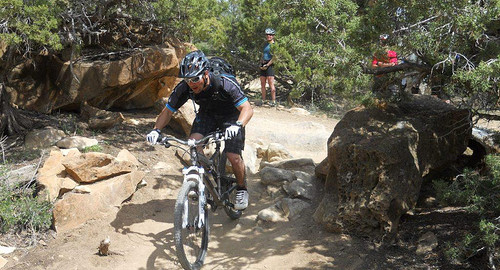 MTB Body Position. While riding mountain bikes in technically demanding conditions is by no means easy, if we take the movements of the rider’s body on the bike, along with the mechanics of the bicycle itself, and strip everything down to the most basic elements, the task (or tasks) of riding can usually be seen as quite simple.

Riding works like many things in life that at first seem complicated and overwhelming: once we break down the complications and see something at its basic bits and pieces, things start to make sense.

Unfortunately, a lot of riders complicate things with misinformation and subsequent bad technique. Often, learning to ride the bike properly is as much about UN-learning bad habits and “getting out of your own way” as it is about acquiring new skills.

This is kind of one of those times: by understanding the way things work (balance) and simply allowing them to do so (with good position on the bike), we’ll be able to use one of our most important tools to its fullest potential.

The first thing that I’d like to address is how our sense of balance actually works. Of course, my intent is to relate this information to mountain biking, not to reach the deepest depths and specifics and intricacies of human anatomy and physiology. So, if that’s an argument that you’d like to have, please save it for another time. (Preferably a time when you and I are sat behind a couple of cold beers that you purchased)

The first element of our balance system is made up of motor and sensory receptors known as proprioceptors. There are many types of proprioceptors, but basically, the receptors that are afferent (going to the brain) are transmitters within our muscles, joint cavities, tendon/muscle junctures, etc, that sense where our bodies are at in space. Some sense the angle of extension or flexation within our joints, some sense the amount of force or the rate of force being applied in a stretching muscle. The messages that these receptors send, when combined, and “computed”, with the other elements of our balance system by our brain and “reflex centers”, then send out messages to muscles in the body to make adjustments, counter-act, readjust, etc, to make sure that the movements of the body are actually effective and controlling the movement of the body in the manner desired. This is obviously an extremely important chunk of riding the bicycle.

The next part of our balance system is the vestibular system that resides in our inner ears. This system senses movements in the forms of acceleration, deceleration, rotational movement, the force of gravity, etc, via the movement (or non-movement) of fluid and gunk in various cavities.

And the third part of balance is our vision. This makes sense because so much of effective balance depends upon determining where our bodies are at in space, and so much of vision is about determining what and where “space” actually is. The vestibular system also monitors head movement to ensure proper vision.

So, what about body position? There are many, many reasons why we need to maintain proper body position on the bike and maintaining proper balance is only one of them. We can’t go into all of them here. I like to say that body position is the “foundation” of riding. Nothing else can be built until the foundation is laid down. And just like building an actual structure, if this foundation is not built properly, you WILL run into problems later on.

Now here’s where things get really… simple? Yes, simple. When we break things down, the human body, from a motion standpoint, really only performs combinations of a few basic movements. All of these movements originate at our core (trunk of your body…the thing that your arms and legs connect to). In recent years, much of training for athletics has moved from throwing around super heavy weights and getting as “strong” as possible to, first and foremost, focusing on the ability to stabilize the core and effectively use strength, power, fitness. This makes a ton of sense: without a strong and balanced core from which all body movement originates, you’re dead in the water. (If Lou Ferrigno has crappy balance, he’s going to stink up the local MTB trails because even though he has incredible-hulk-power, he won’t be able to effectively apply it to handling the bike.)

So we need to maintain a position on the bike that allows our body to maintain balance of the core. (I say, “allow” because we can’t voluntarily control our sense of balance). And this position is what I call the “athletic position of the human body” and it can be seen in the accompanying photo (you will also see this in pretty much all other sports: a tennis player waiting to return a serve, a baseball shortstop, a football linebacker…). 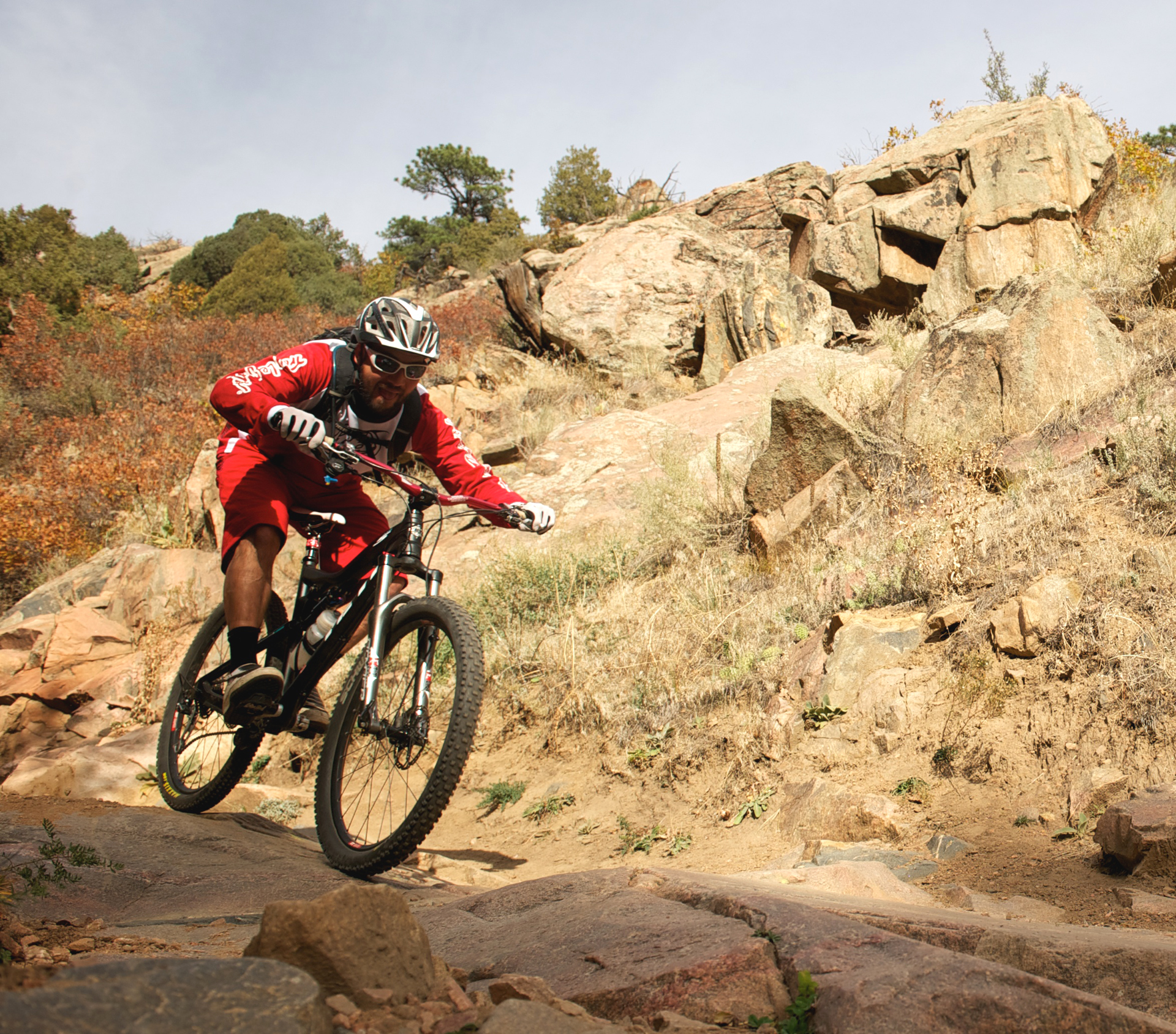 Notice that the appendages of the rider are roughly halfway through their range of motion: halfway through a squat with the legs; halfway through a push-up with the arms; the back is flat and almost parallel with the trail surface; the rider’s butt is sticking out and so is his chest; and the chin is up with the head level. What this position does (among many other things) is effectively create suspension for the core and allow it to maintain a SMOOTH MOMENTUM PATH down the trail by not being subjected to the harsh forces and abrupt movements of the bike. And this gives the balance system a great platform from which to do its job. It should be obvious that the rider’s limbs are in a position to absorb shock, or forces that move the bike toward the body, but equally as important (because the rider’s limbs are approximately halfway through there range of motion), the rider also has the ability to allow the bike to drop away from him or allow the bike to slide, bounce, or lean from side to side (move in any direction), without upsetting the smooth momentum path or upsetting the BALANCE of the core. This is absolutely essential. There IS NOT a top bike handler on the planet that doesn’t do an excellent job of this. Look to any photograph, video, whatever, that features top bike handlers and you will see that this is the neutral position for all of these athletes when dealing with technical riding. Riders will need to allow their limbs to extend or bend FROM this initial position, but everything needs to start here.

In the above position, the rider is able to allow his sense of balance, proprioception, etc, to instantly make the adjustments necessary to generate and apply the necessary forces to his bike. The rider has range of motion in any direction with all four limbs and the core is balanced. If the core is bouncing around abruptly, and continually being knocked out of balance, the body has to first balance the core before adequate forces can be generated. Getting knocked out of balance occurs when riders ride with straight arms and/or legs: in this case, there is only one direction that the bike can move without upsetting the balance and trajectory of their core and that is straight into them. Movement of the bike in ANY other direction will alter the momentum path of the core, and upset the balance of the rider. Unfortunately, most riders do ride with straight arms and legs, way too high on the bike. Most are often in a perpetual state of being knocked around and out of balance, never able to pro-act or react to the situation, but instead, along for the ride (for better or worse), hanging on with a white-knuckle death grip, out of control, and hoping for the best until the trail, hopefully, smoothes out.

Let’s take things further and talk about the rider’s head. It’s safe to say that some pretty important things happen in the head when riding a bike. With very little exception, whatever motion occurs at the core of the body will also be felt in the head. Take a second and do this: jerk your head in a certain direction and then abruptly stop it. Notice how it takes a second for you to get your bearings back? That is because it takes the vestibular system in your ears some time to figure things out and then reset. Really, this system only works if it can compare movement to static inertia (or, necessary future movement vs. current movement in a constant direction.). If you can’t keep your head still, then you can’t provide this system with a basis from which to work and you’ve given up one of your most necessary tools in riding the bike. Proper position suspends the core, which supports the head, which allows the vestibular system to work effectively. Again, watch some video of the top gravity riders; their heads are incredible calm.

And how about the vision aspect? Ever get what I call “eyeball jiggle”? This occurs when your head is getting jostled around so erratically and forcefully that it seems almost as if your eyeballs are going to jiggle right out of your skull.  Your vestibular system, which sends messages to your eyes to compensate for some head movement (much like image-stabilization in a camera) is being overloaded by excessive motion. Needless to say, your vision, which has a huge affect on your sense of balance, is pretty much useless at this point, and again, you’ll find yourself “just along for the ride” with very little control, hanging on for dear life, and just hoping to survive.

So to wrap all of this up, our sense of balance is a very powerful tool, and, though it may seem complicated in its entirety, it’s a combination of various, fairly easy to understand systems within the human body. Though we can’t control our sense of balance the way we can voluntarily move an arm or leg or pedal harder (we can’t really “balance harder”), we can use proper body position on the bike to assure that this system is working most efficiently and effectively while riding.

Though we did not thoroughly cover body position in this article, for now, use what we did learn about proper body position to “suspend the core” and allow that balance system do its thing!